In the spring of 1980, the port at Mariel Harbor was opened, and thousands set sail for the United States. They came in search of the American Dream. One of them found it on the sun-washed avenues of Miami… wealth, power and passion beyond his wildest dreams. He was Tony Montana. The world will remember him by another name… Scarface. .

Before he was busy selling Dunkaccinos in crappy Adam Sandler films, Al Pacino was actually considered one of the greatest actors alive. Case in point is one of his most praised performances as Tony Montana in the Brian De Palma masterpiece, Scarface.

Presented here in 4K, Scarface provides a brilliant film viewing experience, albeit with a few niggles courtesy of the new scan. One of the primary issues that Scarface faces in this 4K iteration is an inconsistent level of grain and a generous level of ‘sunshine’ in the skin tones. The joy of classical filmmaking has always been the nuances of imperfections, drops in focus and general “ageing”, so upgrading an old negative can always prove to be a tricky experience. There are moments when the film looks almost new, as if someone has just hired an amazing production designer and gone to work re-creating 1980’s Miami. While at other times, grain is on the verge of looking almost artificial, and thereby more pronounced to the point of being distracting.

From a sound perspective, it was always going to be a limited improvement due to the source material, but Universal have done a great job in bringing the film added depth. For anyone who ever played GTA 3, Scarface’s soundtrack holds a special place in history. Its importance to the vibe of the film is undeniable, and it has never sounded better. Sound effects also get some love in this treatment, and that is most evident in the final shootout; never mind us saying hello to Tony’s little friend, because it screams at us from afar.

All things considered, this is a worthwhile endeavour, and many could probably consider this the definitive viewing experience of the film. Needless to say, that many of the improvements are minor, but anything that can make Scarface a better film is always going to be a welcome addition. 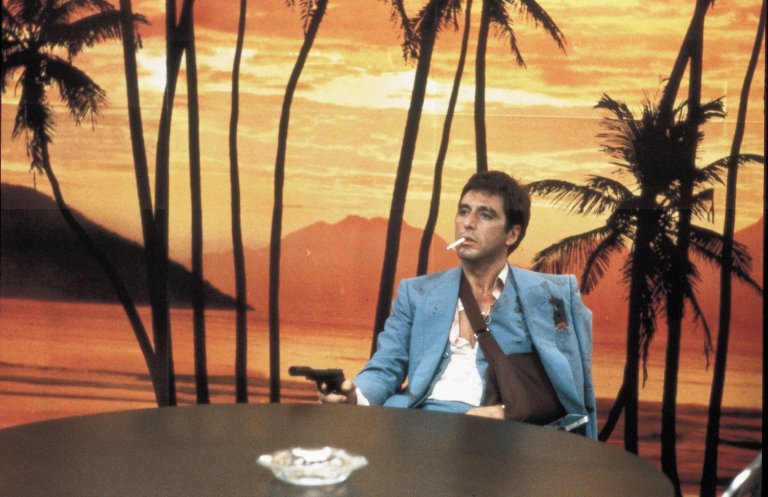 The only new feature here is a 20+ minute Q&A from a recent screening. There are no major revelations, but it is nice to see the principal cast and crew back togther. Meanwhile, the remaining materials are of varying quality, but cover plenty of the film’s creation. These all stem from a previous blu-ray releae.