Dani and Christian are a young American couple with a relationship on the brink of falling apart. But after a family tragedy keeps them together, a grieving Dani invites herself to join Christian and his friends on a trip to a once-in-a-lifetime midsummer festival in a remote Swedish village. What begins as a carefree summer holiday in a land of eternal sunlight takes a sinister turn when the insular villagers invite their guests to partake in festivities that render the pastoral paradise increasingly unnerving and viscerally disturbing. From the visionary mind of Ari Aster comes a dread-soaked cinematic fairytale where a world of darkness unfolds in broad daylight.

No doubt a spiritual successor to the final 20 minutes of Hereditary, Midsommar is a gloves off, balls to the wall, hold on to your hats, maniacal decent in to a terrifying madness that seeps in to your very consciousness and leaves a nihilistic void that would bring a tear to Lars von Trier’s eye. But what makes Midsommar so affecting (apart from an absolutely stunning turn from Florence Pugh) is the pace with which it crawls into the darkest reaches of your psyche. Almost knowingly, Aster spends so much time worldbuilding with the Hårga festival and the creepy Cheshire cats who run it, or deconstructing the toxic relationship of Dani and Christian; almost boring us into a trance-like state, gently laying us in to ‘The Sunken Place’. All of this is so that he can utterly traumatise us while we sit frozen; weeping in a disorientated panic for the 3rd act. In short, Midsommar is a transformative experience that promotes empathy with the main characters to a point where we experience the horror on their behalf; and this is something that can rarely be said about a horror film.

And let’s be fair, it is the 3rd act that will have most people talking about the film long beyond its closing credits. It is violent, it is sick, it is disorientating, it is hilarious and utterly, utterly weird. Midsommar is like Michael Haneke, David Cronenberg and Stalney Kubrick had their DNA spliced into a horrific lovechild that offers a commentary on the spiteful nuance of a dissolving relationship under the gaze of a society designed to amplify the human experience (either as a collective or as a casual observer). In a perverse irony, Midsommar seems to be about those who interfere in the private from family to bros to complete strangers. In today’s world, our most intimate truths are often our most public narratives. Or maybe it is just about dependent personalities….or maybe Aster just has an issue with bears.

The Director’s Cut of Midsommar maybe chances its arm a little too much in this area at times. For the most part, the added scenes focus mostly on rituals (namely a great scene where a child volunteers to be drown) and emphasising just what a turd Christian actually is (in case we already didn’t know). For those having never seen the film, this version is probably a deeper experience namely for the very reason that those who have seen both versions might prefer the Theatrical Cut. It is this added length that will add to the experience on a first viewing but feel a tad long on a repeat viewing. That being said, Aster is truly a modern auteur, and as with extended cuts of great films such as Apocalypse Now and Blade Runner, there is not really a ‘better’ version but rather just different great viewing experiences. Even if this does end with us vomiting in a fury of distress and bewilderment. 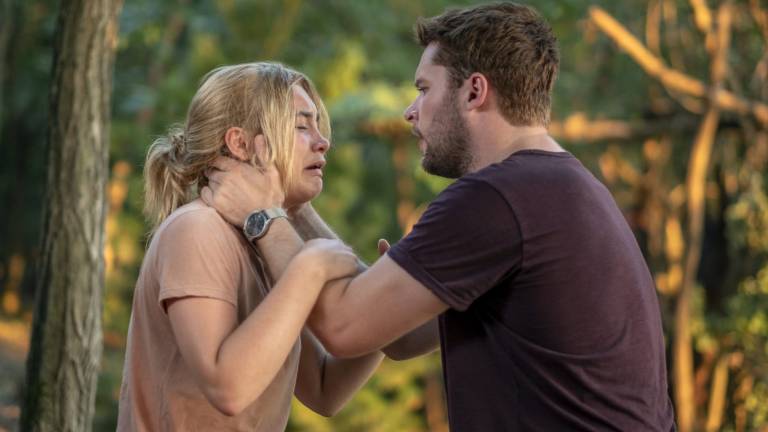 A short and pretty weak EPK video that merely breezes over the entire production. This film deserves better.

A chaotic and misery-laden fairytale that will keep you awake at night, and far away from Ikea.