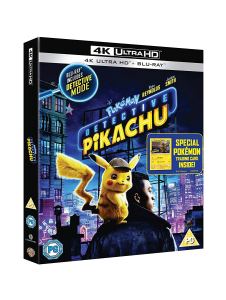 Ace detective Harry Goodman goes mysteriously missing, prompting his 21-year-old son, Tim, to find out what happened. Aiding in the investigation is Harry’s former Pokémon partner, wise-cracking, adorable super-sleuth Detective Pikachu. Finding that they are uniquely equipped to work together, as Tim is the only human who can talk with Pikachu, they join forces to unravel the tangled mystery..

There is a moment about two-thirds of the way through Detective Pikachu, when the titular sleuth is ambling along a road, crying to himself and warbling the theme song to the 90’s animated series from which he derives. It is an extremely meta, odd and ludicrous moment that sums up the viewing experience of this film perfectly. Detective Pikachu is so obscenely self aware, yet woefully bombastic, that it feels like a film made for the 90s. One which you remember fondly as a child but cringe at as an adult. Think Corey Feldman era Ninja Turtles. It is nostalgia and embarrassment all rolled in to one.

Aside from the marmite styling of Ryan Reynolds as a coffee obsessed ball of yellow fluff, Detective Pikachu lives and dies with its onslaught of beastie cameos and hyper real digital effects. Nothing much can be said for the human cast, and some convoluted plot about MewTwo and a mystery drug feels like a byproduct of the Gremlins 2 skit from Key and Peele. But it really does find its footing with the visual effects. For fans of the Pokemon franchise, Detective Pikachu is a visual feast that pays homage to the animation style of the original designs, whilst also imbuing each Pokemon with a sense of life and personality.

Standout moments are thin on the ground, but the highlights come courtesy of Mr. Mime and a black market club battle that will leave Magikarp fans well pleased. Aside from this, the film is predominantly made up of Ryan Reynolds-esque rants, some mooning from Justice Smith, and a 3rd act that just gets more and more ridiculous as it goes.

Rob Letterman previously directed Goosebumps with Jack Black, and this feels like a logical side step as a nostalgia heavy blowout. But where Goosebumps worked due to a restricted scale, Detective Pikachu is too bloated and poe faced to get away with being anything other than the film your kids like. There may be one or two laughs on offer, but for the most part Detective Pikachu is something to be endured rather than enjoyed.

With regards to this 4K presentation, as the film is an upscale don’t expect massive leaps in detail. But with all its neon trimmings, it is the colour palette and sound that matters most. Well good news peeps, Detective Pikachu delivers bold on both!

Warner Bros are always very generous with their special features and Detective Pikachu is no exception. The ‘unique’ feature on offer here is Detective Mode, which is essentially a pop-up video style feature talks about everything from how the film was made to tidbits on the different Pokemon. There is also a collection of the usual Making Of stuff, and some recycled Deadpool marketing strategies courtesy of Ryan Reynolds. 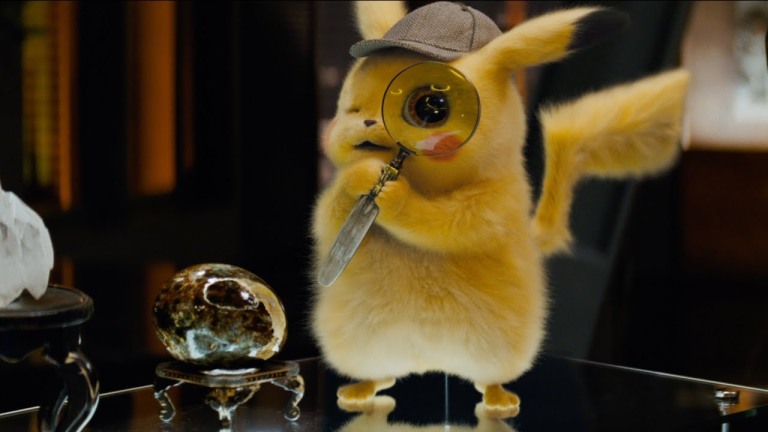 For the most part, this underwhelming 90’s homage will hit best with kids 10 and below, which makes it a fun family film, but a terrible everything else.