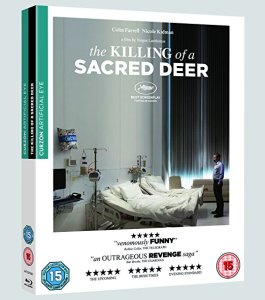 Colin Farrell and Nicole Kidman star in this horror drama written and directed by Yorgos Lanthimos. Steven Murphy (Farrell) is a successful cardiac surgeon who lives a happy life with his ophthalmologist wife Anna (Kidman) and their two children Kim (Raffey Cassidy) and Bob (Sunny Suljic). However, his perfect life starts coming apart at the seams after he befriends 16-year-old Martin (Barry Keoghan).

There is a scene in The Killing of a Sacred Deer, where Colin Farrell’s Steven Murphy goes to visit the principal at his children’s school. The set up is simple (a parent / teacher council), the subject matter monotonous (who has good grades), but the purpose of the conversation is utterly horrifying; one of them has to die, which one is ‘worth’ saving. This is the very heart of what makes Yorgos Lanthimos’ latest picture such a twisted and wonderful piece of cinema, and also why only a director such as Lamthimos is so suited to the subject matter. Only he would be able to make something so gut wrenching, seem at once so boring, so ridiculous and so ghastly.

If you fancy it, The Killing of a Sacred Deer is one of the bleakest comedies of the year. Conversations between cultured beings are punctuated with statements such as, “our daughter just started menstruating.” The psychotic Martin threatens Nicole Kidman’s Anna whilst scoffing down pasta, staining his face with red sauce. Even the final, stomach-churning moments are punctuated by the worst variant of pin the tail on the donkey you’ll ever see. Just like The Lobster before it, Sacred Deer is witty, memorable and hella odd. But it is also chilling. See a torture scene play out against the will of the captor, with gory consequences. See a subversive game of aloof eroticism play out, with a subtext that immediately draws questions about those involved. See a child franticly cut his hair in an attempt to cling to whatever favour he can get from parents who are quickly posing a threat. This is the sort of stuff that would make even Michael Haneke lose sleep.

The wonder of Sacred Deer is that it is also an immense exercise in tonal filmmaking. With its wide lenses and long fluid movements, Lamthimos and Director of Photography Thimios Bakatakis create a sterile and symmetrical world with all the pathos of the hollow souls that inhabit it. Lamthimos’ has a very unique deliver system for his actors, reciting lines in the most neutral of manners. The music of his words have an unusual cadence that plays nicely in to generating mystery, as we never fully understand each character or their intentions. It is as if he is resolved on driving the audience to impart their own selves in to the narrative. Sacred Deer dares you to stake a claim and design your own narrative of intent. Then it quickly punishes you for taking sides.

It is not a style of storytelling that will suit everyone. Martin in particular could prove to be a problematic antagonist. His façade is no different to those around him, which means his sociopathic characteristics are hidden in plain sight, amongst the emotionally flat world he inhabits. His obsessions with a watch strap and the insistence of getting Colin Farrell to shag him mum seem almost comical, when at times they should feel like a red flag to the Murphy family. The ambiguity of his ‘powers’ is also maybe one macguffin too far, leading to a somewhat unsatisfactory ending. In Barry Keoghan, however, Lathimos has found a second muse. Both he and Farrell seem wholly suited to this style of delivery, and make for a magnanimous double team. Kidman, meanwhile, shines effortlessly in another great role from an outstanding run in 2017.

Sacred Deer is not ‘accessible’ cinema, but it is a sight to behold. Much like Darren Aronofsky’s mother!, it will haunt the viewers for days after, and leave a strong aftertaste. At the very least, you’ll never look at Groundhog Day in the same way again.

A reasonably enjoyable Making Of offers a peek behind the curtain of Lanthimos’ mind. While a plodding Q&A brings up a great comparison from Nicole Kidman. She compares her director to Stanley Kubrick. Not only is it a fitting comment, it also puts some great perspective on to the type of filmmaker Lanthimos is.

As a parent, it will disturb you. As a child, it will scar you. As a film, it will make you grateful for originality.