If, like us, you’ve never heard of Henri-Georges Clouzot, then you’ve good reason to feel just a little embarrassed. Often considered to be the French contemporary of Alfred Hitchcock, Clouzot has a hefty body of work, with three of his most acclaimed receiving sexy little 4K scans courtesy of Studiocanal. 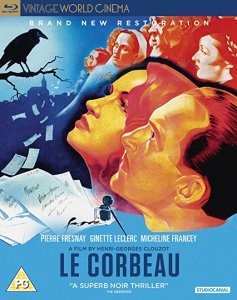 Remy Germain (Pierre Fresnay) is a doctor in a French town who becomes the focus of a vicious smear campaign, as letters accusing him of having an affair and performing unlawful abortions are mailed to village leaders. The mysterious writer, who signs each letter as “Le Corbeau” (The Raven) soon targets the whole town, exposing everyone’s dark secrets. This allegorical film was highly controversial at the time of its release, and was banned in France after the Liberation.

Le Corbeau is by far the best in this little collection of movies. It is a film so relevant even today, that it’s downright eerie. Gossip is a central theme, with mass hysteria gradually building to breaking point. There are elements of murder mystery at play, and Clouzot brazenly covers (for 1942 at least) some pretty taboo subjects – cancer patients committing suicide = pretty dark. But it is the aesthetic presence of shadows and light that help to build a world cloaked in mystery and misdirection. Clouzot even finds time to sire one of the most imitated motifs in horror; the cracked mirror. In today’s world this film should be re-titled ‘Trump’s America.’

Jenny Lamour (Suzy Delair) sings in a music hall in postwar Paris, accompanied by her husband, Maurice Martineau (Bernard Blier), on piano. When Martineau notices his wife flirting with an older businessman named Georges Brignon, he follows her to Brignon’s house with the intent to kill him. At the house, Brignon is found murdered — but by someone else. Inspector Antoine (Louis Jouvet) conducts an investigation that implicates Martineau, whose planned alibi comes loose.

By 1947, Clouzot’s quality seems have slipped somewhat. Hailed as a critical success, Quai Des Orfevres is actually pretty dull. There are some elements to be enjoyed – most notably, the prophecy of Maurice’s alibi quickly dissolving under close scrutiny – but the central characters seem to be drawn rather than written. Beyond jealousy and obsession, no one makes much of himself or herself other than to serve the tenuous whodunit. There is a twist of sorts, but by this point, the human element of the film’s drama has all but disappeared, and we really couldn’t give a frig who killed that lecherous old hunchback any rate. On the plus side, Clouzot is still creating some great aesthetics at this point.

Josée is the wife of an artist whose work is exhibited in Stan Hassler’s modern art gallery. Stan, impotent and depraved, satisfies himself by photographing women in humiliating poses. Josée is fascinated by the man and soon falls completely in love with him.

Finally we come to La Prisonniere. It is here that Clouzot and Hitchcock come in to contact for one last time. Both men saw out their careers in colour. Both men seemed a little embittered in their old age. And both men left behind a film that is a grotty sexualised depiction of violence and fixation (in Hitchcock’s case, Frenzy). La Prisonniere is a freaky, and often psychedelic, delve in to the world of basement art and bondage. Although the ultimate feeling of dread and mistrust is not totally dissimilar to Le Corbeau or Quai Des Orfevres, there is a definite sense of depravity on show here that has become more potent than earlier works (the suicidal cancer patient seems a world away). You could imagine David Fincher taking a stab at remaking this for the modern day, substituting oranges and greens for his monochromic browns and yellows. But it is a film surpassed by other itchy little works at a similar time, such as Peeping Tom. There is, however, some serious merit – once again – in Clouzot’s use of the camera. Using jump cuts and a camera tilt to build desire is one such example of a master at work. It is just a shame that his films became less human and more perverse as they progressed.

Each film comes with a short yet informative Documentary. These function nicely for those with little knowledge about the films, but one cannot help but think that some extra helpings would go down nicely.