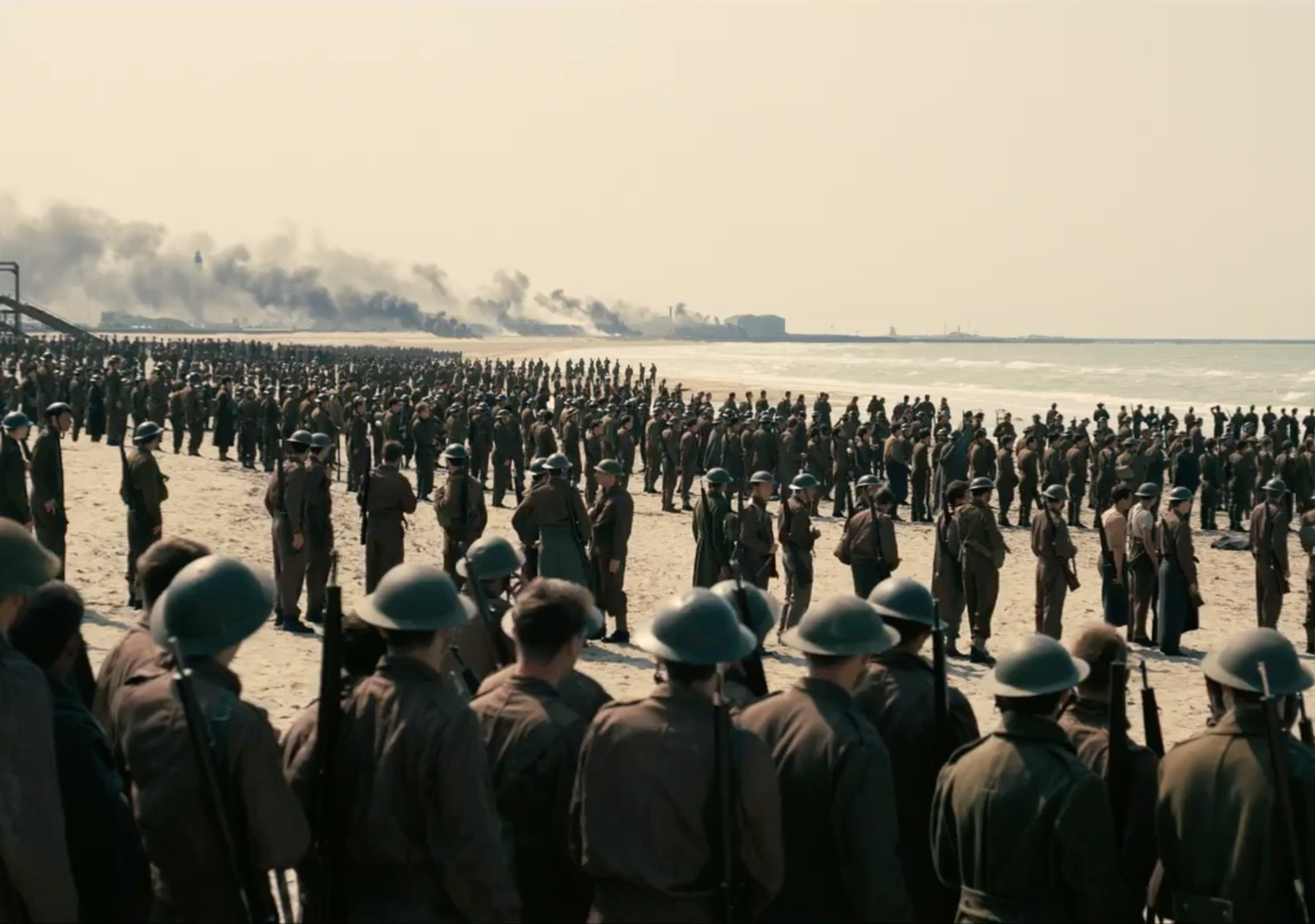 In May 1940, Germany advanced into France, trapping Allied troops on the beaches of Dunkirk. Under air and ground cover from British and French forces, troops were slowly and methodically evacuated from the beach using every serviceable naval and civilian vessel that could be found. At the end of this heroic mission, 330,000 French, British, Belgian and Dutch soldiers were safely evacuated.

The war movie has been tackled in many different ways, but Christopher Nolan’s Dunkirk is a strange beast in that it approaches the usual troupes of battle from the perspective of a race-against-time thriller. From Hans Zimmer’s increasingly oppressive ticking score, to Nolan’s time and date obsessed plot structure, here is a film that makes its mark by putting audiences on edge. Dunkirk is Hitchcock redux.

Set in three locations (land, sea and air), Dunkirk takes its time to demonstrate not only the bravery and uncertainty suffered during those fateful days on the beaches of northern France, but also the cowardice of some and sacrifices of others. Nolan manages to explore national pride, guilt, PTSD, fear, valor, friendship, Xenophobia, cabin fever, boredom, anger and exaltation all while creating easily the most conversationally sparse film of his career. Technically it is a flawless endeavor, and Nolan is proving yet again that regardless of scale, he can deliver the goods every time.

From a casting element, there is no real stand out performance, in what could be argued as a common thread in Nolan’s filmography (barring Heath Ledger’s Joker, it is rare that Nolan’s cast ever truly make an impact). But everyone does a terrific job of maintaining authenticity. Harry Styles, who one might have expected to ruin every scene he is in, plays a perfect sniveling turd (no doubt based on real life 1st hand experience). Cillian Murphy gets the most to do with the least amount of time, and Mark Rylance is a human cuddle. But it is Aneurin Barnard who truly breaks our hearts as the near mute, Gibson.

Not everything in the film works, as it should, however. As intoxicating as Hans Zimmer’s score is, it feels adjacent to the film rather than a natural part of its fibre. It is too invasive, possesses too much of an ‘otherness’, yet syncs well with the central purpose of building anxiety. Much like he did with Interstellar, Zimmer seems to wax lyrical in the most operatic of ways, building a frenzied cyclone of sound in his own creative bubble. Depending on your emotional constitution, this could either be a plus or a minus for the viewing experience. A further and less pronounced fault is Nolan’s penchant for time based nipple twisters. War films can be complicated to follow; all the characters look the same, flurries of death and battle can often leave us wondering who survived, and getting to grips with the flow of warfare is sometimes a bit of a slog. So when Nolan throws in his usual Doc Brown level obsessions with time and space, the end result can sometimes mean the sacrifice of emotive involvement in favour of a PHD-level focus on form.

So what about the 4K presentation? There are some films that give 3D purpose (Doctor Strange), some that make traditional techniques worth reviving (The Hateful Eight) and others that use large format filmmaking successfully (The Master). Dunkirk is not only a fabulous specimen of IMAX done well, but in its 4K presentation is a shining example of why this tech even exists in the first place. From its deep and layered landscapes to the sweat soaked claustrophobia of a spitfire cockpit, Dunkirk 4K is the sort of viewing experience where you can practically smell the gunpowder, taste the salty sea air, and feel the icy cold waters of the English channel. So it is safe to say that here shines forth a marvelous example of the 4K presentation, and being such a impressive film to boot, makes this blu-ray a worthwhile investment.

A feature length affiar broken down in to bitesize chapters. Highlights; costumes made with a blowtorch and extra soldiers made from carboard. Whodda funk it!?

Vintage Nolan. Although not all of the intended notes hit home, Dunkirk proves to be a fitting tribute.