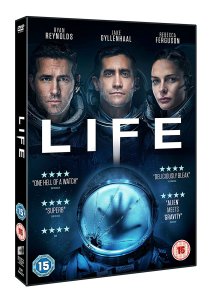 Life is a terrifying sci-fi thriller about a team of scientists aboard the International Space Station whose mission of discovery turns to one of primal fear when they find a rapidly evolving life form that caused extinction on Mars, and now threatens the crew and all life on Earth.

If you want to know how Daniel Espinosa’s sci-fi horror, Life, will work out, then the first 5 minutes of the film will tell you everything you need to know. As a multitude of scientists float awkwardly around a glossy and grey tinted space station, they are sewn together by Ryan Reynolds’ endless banter and followed by an unnecessarily ostentatious single shot. Frustratingly, the meat of the scene is what should be a tense Gravity-infused moment outside the station in the unforgiving vacuum of space. The purpose of this scene is that Reynolds’ Rory Adams is out there with a mechanical arm trying to capture a swirling pod hurtling toward them. Yet for some unknown reason, we see very little of this or even experience a minutia of the tension, because Espinosa and his creative choices have us elsewhere. That is Life; a film that squanders every natural moment of tension in favour of showing off.

It would be unfair to say that Life is without its moments. The initial experimentations with the specimen known as ‘Calvin’ are rather engaging. Ariyon Bakare’s Hugh gets a decent character arc exploring the nature of physical disability, while the early body horror scenes have a genuine bite to them. You could even argue that in spite of the film’s B-movie quality, the strong cast play everything straight enough to bring it closer to Alien territory; making it a better film by proxy. There is also nothing wrong with the script or Espinsoa’s directing per se, but there is also very little about it that makes Life memorable.

One of the main reasons Life fails to resonate may also have something to do with how poorly the parasitical space horror sub genre has been handled ever since John Hurt first inhaled a Xenomorph embryo. In recent years the likes of Apollo 18, The Last Days on Mars, Pandorum and the ever-so-pointless remake of John Carpenter’s masterpiece The Thing, have caused genre fatigue. Life does almost nothing to overcome the pratfalls that so many before have experienced. This leaves a definite sense that the film was either much better on paper, or just a lazy re-hash of existing conventions; oh, but with the twist that these ‘scientists’ are supposed to be smart people.

As the film starts to lose any sense of self worth, it spirals in to a confusing and tense free example of filmmaking gone awry. The final scene is as predictable as bank holiday rain, and Calvin’s evolution into a Transformer-like octo-snake is a distraction rather than genuine fear mongering. Life could have been a great film, but instead it is merely average. A Metacritic score of 54, then, seems just about right.

Ever wanted to see astronauts argue about ‘tang’, then head on over to the Deleted Scenes. If not then, you have a brief look at the Zero G effects, a look at how scientifically ‘accurate’ Calvin is – complete with talking heads from genuine scientists! and Claustrophobic Terror; an ode to how great the film’s script was, that also functions as an EPK for the film as a whole.

The Astronaut Diaries are glorified TV spots that offer some character backgrounds.

Summary:
The limited number of thrills and spills are severely outweighed by slowly decomposing plot.