Three generations of the notorious Cutler family live as outlaws in the Cotswolds, the heart of Britain’s richest countryside. The Cutlers live by their own rules, practising their own way of life—poaching, pilfering and provoking the police. Chad (Michael Fassbender) finds himself torn between respect for his archaic father, Colby (Brendan Gleeson), and a desire to forge a better life for his children. When Colby coerces him into a major robbery one night, Chad is faced with a choice that will change his life forever. Should he follow tradition and do his father’s bidding as his rightful son and heir, or should he break the chain and set out on a new path? With the law cracking down on the clan, Colby tightening his grip on the family, and prejudices among the local populace becoming ever more hostile, Chad discovers that his destiny may no longer lie in his own hands.

On paper, Trespass Against Us is the quintessential domestic drama; as it sets itself up as the tale of one man’s efforts to emancipate himself from the evil clutches of his overbearing father. The end result is an all-together underwhelming experience.

There is a central theme of perspective that runs through the film. Whether debating the origin of our species (fish!?) or the nature of Earth’s shape (flat, if seen from a tree), it seems that when tyrannical patriarch and raconteur, Colby denies the truths us “gorgies” take for granted, he is at once establishing his failings in the eyes of divergent son, Chad, and also demonstrating the powerful sway he holds over the rest of the Cutler tribe. Colby’s views are never fully challenged (although both he and Chad do have an affinity for the water) or supported (albeit, pondered on in the film’s tree-based closing moments), but there is a definitive sense that truth is only ever a matter of perception.

Outside of this loose pontificating, it seems to be that Trespass Against Us little else it wants to say. If it intends on dispelling the gypsy myth, then it does a lousy job; Chad a company lie, cheat, steal, fight, and bully their way through the film. The only thing missing is a paved driveway and a pony trap! If it is a film about defying destiny, then it fails at that too. For a man who seems to want ‘freedom’ from his life, Chad does very little in the way of standing his ground. But what this does do, however, is lend itself to a reasonably interesting dynamic in that Colby celebrates his son, yet holds a parental rule over him the way a toddler might be ‘managed’.

The film’s two ‘set pieces’ – both car chases – seem oddly placed in what otherwise appears to be a bittersweet human fable. It is unclear if the motivation was to add some meat to a lean narrative, or to find placement for The Chemical Brothers’ soundtrack. But whatever the reason, there is a definite change in pace and tone during these scenes, which highlight just how uneven the narrative truly is. This aside, the cast add much needed credibility; particularly Brendan Gleeson, who’s Colby is equal part Jim Jones and Vito Corleone.

With a closing sequence that carries more weight than the entire 90 minutes that proceed it, Trespass Against Us is far less than the sum of its parts. It is a messy, absent little concept movie that stocks itself with an excellent cast and hopes to deliver on its premise. But unfortunately, the end product is just as ugly as the campsite it takes place on. 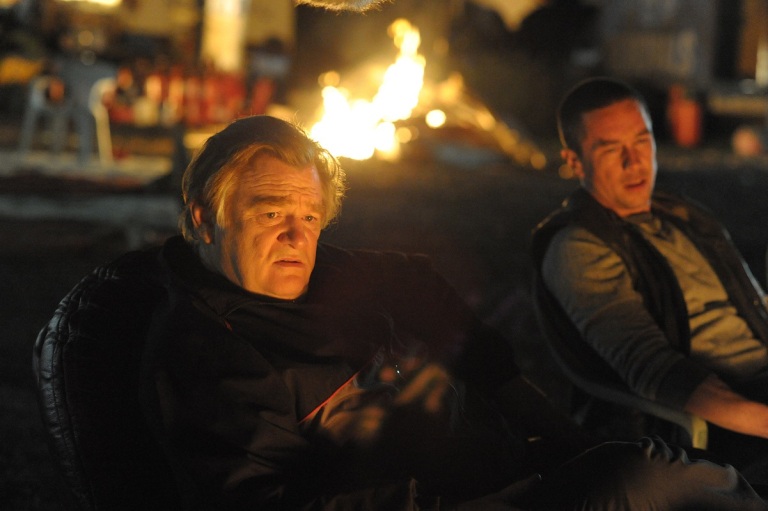 A suprisignly solid Making Of, and a little number on the film’s score.

Summary:
You might laugh, you’ll definitely cry. And you’ll find out what “mush” and “gelling” mean. But what you won’t do, is be enjoying yourself.