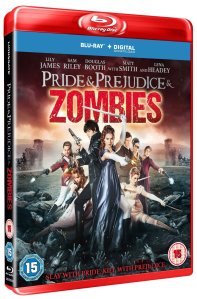 Five sisters in 19th century England must cope with the pressures to marry while protecting themselves from a growing population of zombies.

Many feel that in spite of its concerns with hoighty toighty social politics and the ever present need for male accompaniment, Pride and Prejudice is actually a rather empowering novel for women. The Bennet sisters, most directly Elizabeth, are often outspoken and eccentric, usually found running rings around their father and the men in their lives. Smith picked up on this in his adaptation, creating an altogether ironic twist on the female experience, while Steers’ meanwhile turns the Bennets into a bunch of sexed up ninjas. The message here is that lust and violence is all a girl really needs to stick a finger up at tradition. This is a film that wants to be Pussy Riot in a corset, but truth be told, what a girl – or a man for the matter (I thank you Game of Thrones reference) – really needs with Pride and Prejudice and Zombies, is not attitude, but rather a plot. It is a real headscratcher, but somehow Steers has managed to turn one of literature’s most renowned stories into total twaddle. Zombies appear and disappear at will, they are easily offed and then suddenly unstoppable, characters come and go (particularly Mr Wickham), and no one is ever quite sure whether Lena Headey’s Lady Catherine de Bourgh is a goodie and a baddie. But worst of all, it is sometimes impossible to remember which sister is which.

This is not to say the film is lacking in imagination or execution. One early scene involving an insect is rather ense, and some of the more extravagant martial arts look pretty cool in dresses and coattails. But the uneven tone and tangential forays into animation chop at the film’s easy pace like a hatchet to the head of a walker. The 3rd act is an utter mess, and save a few graceful notes of comedy from Matt Smith, this is a film lacking in any real sense of fun; it might be dripping with sexual tension and silliness, but Pride and Prejudice and Zombies somehow takes itself a little too seriously. It really is just a dumb old film.

The young cast seem to be having a ball playing kung-fu crocheters, while Sally Phillips brings a stand out performance to the role of Mrs Bennet. Sam Riley, however, doesn’t quite take to Mr Darcy. As dashing and talented as Riley might be, his Darcy is less troubled gentleman and more dried out stalwart. The pairing of he and Lily James doesn’t mesh, which in turn severely belittles the film’s central love story.

It is not clear who Pride and Prejudice and Zombies is for. There are moments which feel aimed at Austen fans, while others are clearly catering to teenage boys. This feels like a spiritual cousin to James Corden’s 2009 debacle Lesbian Vampire Killers; albeit a slightly more enjoyable outing. Pride and Prejudice and Zombies fairs slightly better than the other Smith adaptation Abraham Lincoln: Vampire Hunter. But then again, that is like saying being robbed is better than being shot.

The features on offer here are mostly EPKs. A Gag Reel serves as a collections of giggles and snores, while the Deleted Scenes amount to nothing more than waffle.

From the five other Making Ofs provided, the most enjoyable is Mr Collins Line-O-Rama. It appears that Matt Smith and a selections of scones can be very funny indeed. Meanwhile, The Bad Ass Bennet Sisters serves as a testament to the physicality of each actor and their role.

Summary:
Unlike the source material, this is hardly a classic, or even a witty entry into any sub-genre. Pride and Prejudice and Zombies may have been an honest attempt at making something enjoyable, but it is hard to fully engage with a film when you are half asleep.